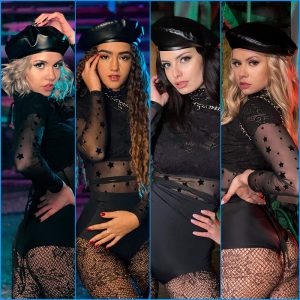 Bulgarian girl band 4MAGIC gathers 4 talented girls with 4 powerful voices, and is the first group to ever win The X Factor Bulgaria. Right after their remarkable breakthrough in the format, they were signed by the country’s biggest record label – Virginia Records, and have since been on a fast-paced rise in the music industry.

Eliya, Nikol, Valentina and Eleonora have been a singing quartet since 2014 and specialize in Pop music, oftentimes fused with Bulgarian folklore. Their debut single “Together” (“Vecherai, Rado”), produced by Romanian hit-maker Monoir, took the country by storm and became the most airplayed song on radio and TV in 2018, having spent 26 consecutive weeks atop the Official Airplay Chart. In 2019, the music prodigies won “Best Debut” at the Bulgarian Annual Music Awards. Their following singles “Kolko Mi Lipsvash”, “Dancing With The Satellites” (“Vselena)”, “XO XO” and “Dai Mi” all turned into smash hits and all-year-round music delights, leading the Official Airplay Charts for many weeks.