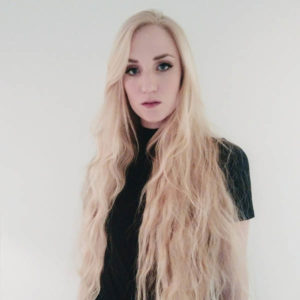 Ellen Berg grew up in a bonafide music family, with a jazz-playing father and a singer/instrumentalist mother. That Ellen would embrace and pursue music as a profession was obvious, given the environment she was brought up in. At the age of 7, she decided that she was going to be a singer and a songwriter. Throughout her elementary and high school days, she enrolled endless music classes. She then finished off her college years with music as major.

Over the years Ellen has been singing with numerous acts, and has continued to network and collaborate. She has refined and developed her writing skills, has been writing in Korea, Japan, South Africa, Sweden, and in 2017, was signed to EKKO Music Rights.

In 2017, Ellen co-wrote the international #1 smash hit single “Peek-A-Boo”, released by K-Pop giants Red Velvet (SM Ent.), which gave her a Billboard World Charts #1 and Billboard World Digital Sales #2 placement. Not forgetting rave reviews and over 160 million YouTube views. She also co-wrote Red Velvet’s #1 smash hit “Power Up”. Plus hit singles with superstar Taeyeon to name a few. She’s now in high demand by leading K-pop labels SM Entertainment, JYP, FNC, Big Hit and many more. Ellen is also co-author of the track “We are Bulletproof: the Eternal” by BTS from their newest album MAP OF THE SOUL: 7.

– Jessica – “Beautiful” from the album Wonderland