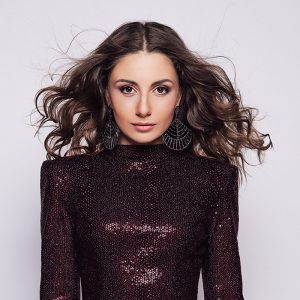 Mihaela Marinova is one of Bulgaria’s most iconic voices of all time, a multiple-time award winner, X Factor Bulgaria 2017 finalist, and artist of the country’s biggest record label – Virginia Records. Having performed with her at the X Factor finale, British superstar James Arthur shared: “When I first saw Mihaela, I thought she had an incredible talent. She’s got all it takes to become a world success.”

So far, Mihaela has garnered more than 60M and views on her singles and videos, with each of her tracks having spent weeks at #1 in the Official Airplay Chart, including her smashing debut “Stapka Napred” in 2015, thanks to which Mihaela won “Song of the Year”, “Best Debut” and “Video of the Year” at the Annual Bulgarian Music Awards (2016).

2020 saw the release of Mihaela’s debut album “Stapka Napred”, featuring 12 tracks and her most successful collaboration yet – “Listata Padat”, with Bulgaria’s favourite hip-hop duo Pavell & Venci Venc’ that has more than 12 million YouTube views. In 2021, Mihaela won “Album of the Year” and her newest single “Serial” was chosen as the main music theme for the second season of one of Bulgaria’s the highest-rated TV series.