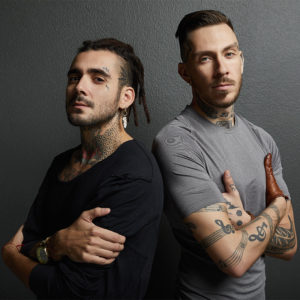 Bulgarian hip-hop duo Pavell and Venci Venc’ are multiple time award winning songwriters/artists. Pavell is also one of the best music producers in the country. They were signed by Virginia Records in 2013 and since, have released more than 25 hit singles, with over 130 million views. Their debut studio album “SeTaaBrat” (2016) became a huge success in Bulgaria, earned a gold sales status, topped the Spotify albums chart, and was #1 on ITunes for highest-selling album in the country, with nine #1 singles in the Official Airplay Chart. October 2020 saw the release of their sophomore album “Upgrade”, featuring 17 tracks and collaborations with some of Bulgaria’s biggest names in music. Winners of “BG Duo of the Year” (2016, 2017, 2018), “Best Performance” (2016) at the Bulgarian Annual Music Awards, and “Group of the Year” (2016) at the 359 Hip-Hop Awards, Pavell & Venci Venc’ are also hosts of “The Voice” Bulgaria seasons 4, 5, 6 and 7. Thanks to their distinctive sound and catchy lyrics, they have created hits for some of Bulgaria’s biggest stars. They are also headliners of the country’s largest tours and events every year, where they have performed next to worldwide stars Rita Ora, Jonas Blue, Tinie Tempah, Bebe Rexa and others. In May 2019, they took part in the first international songwriting event in Bulgaria – Sofia Songwriting Camp, where they created music alongside world-class producers, songwriters and artists.