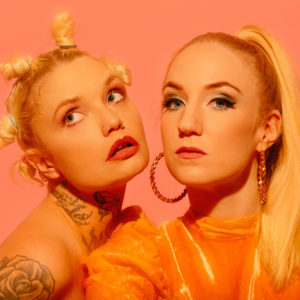 Raw and full of bite, with the looks of a young Marilyn Monroe gone bad, a club kid, with a taste for anything that shines or sparkles, Cazzi Opeia is a star, born into the world of music. As the daughter of a music loving family, she was early on introduced to singing, as well as various instruments, which soon led to her first songwriting attempts and live performances. She is an extremely driven creator and performer, a brilliant songwriter and lyricist and last, but not least, an accomplished artist and singer. In the recording studio, her harmony, skills and fun loving attitude makes her a blessing to work with. And lyrics come easy to her. Her songwriting style takes inspiration from pop, electro, techno, soul and dance music.

2017 was a very busy year for Cazzi. She, together with Seoul-based DJ/producer JinXJin, released the infectious single “Batman & Robin”, which created a huge fan base around the globe and earned her an invitation to perform at Spotify’s headquarters in Stockholm, and the Swedish embassy in Seoul. She also co-wrote the lead theme for highly acclaimed Swedish thriller series Vene, Vidi, Vici (Viaplay/Viacom).  On top of that, a number of songs have been recorded by international artists. K-pop giants TWICE (JYP Entertainment) picked Cazzi’s song “24/7” for their multiplatinum album Twicagram, which went #1 on Billboard’s World Album Chart. Red Velvet (SM Entertainment) released her and her close writing/production partners Moonshine’s smash hit “Peek-A-Boo” as single. The result? Well, rave reviews in a number of tastemaking magazines, including Billboard. The single was a monster performer (physical, downloads and streams), over 100 million YouTube views, and platinum certified! In July 2018, Cazzi saw her co-penned song “Dance The Night Away” become #1 on Billboard World Chart and K-pop Chart with superstar girl group TWICE (JYP). The video has surpassed the 100 million views mark on YouTube. In August, her co-penned “Power Up” was released by Red Velvet. Yet another #1 Billboard World Chart and K-pop Chart and #2 on Worldwide Digital Sales! Plus rave reviews and platinum award again.

In between scoring hits, Cazzi also visited a number of writing camps around the globe, including the renowned Song:Expo in Trondheim, StarJam in Bangkok, Seoul Calling at SM Entertainment’s HQ in Seoul, as well as Big Hit Entertainment – home to the world’s biggest boyband BTS. Cazzi has become one of the most sought after writers in the K-pop world and 2018 has seen her work with an array of A-list people in Los Angeles, London, Stockholm, Shenzhen (China), Lijiang (China), Seoul and Tokyo. Cazzi Opeia was nominated at The Swedish Music Publishing Awards 2018 in the category “Breakthrough of the Year”. In 2019, Cazzi was once again nominated, this time in the category “International Success of the Year”, competing against megastars Avicii, Robyn and Mabel. Cazzi is also co-author of the track “We are Bulletproof: the Eternal” by BTS from their newest album MAP OF THE SOUL: 7.

– Red Velvet – “Sunny Side Up!” and “Milkshake” from the EP The ReVe Festival’ Day 1

Ellen Berg grew up in a bonafide music family, with a jazz-playing father and a singer/instrumentalist mother. That Ellen would embrace and pursue music as a profession was obvious, given the environment she was brought up in. At the age of 7, she decided that she was going to be a singer and a songwriter. Throughout her elementary and high school days, she enrolled endless music classes. She then finished off her college years with music as major.

Over the years Ellen has been singing with numerous acts, and has continued to network and collaborate. She has refined and developed her writing skills, has been writing in Korea, Japan, South Africa, Sweden, and in 2017, was signed to EKKO Music Rights.

In 2017, Ellen co-wrote the international #1 smash hit single “Peek-A-Boo”, released by K-Pop giants Red Velvet (SM Ent.), which gave her a Billboard World Charts #1 and Billboard World Digital Sales #2 placement. Not forgetting rave reviews and over 160 million YouTube views. She also co-wrote Red Velvet’s #1 smash hit “Power Up”. Plus hit singles with superstar Taeyeon to name a few. She’s now in high demand by leading K-pop labels SM Entertainment, JYP, FNC, Big Hit and many more. Ellen is also co-author of the track “We are Bulletproof: the Eternal” by BTS from their newest album MAP OF THE SOUL: 7.

– Jessica – “Beautiful” from the album Wonderland