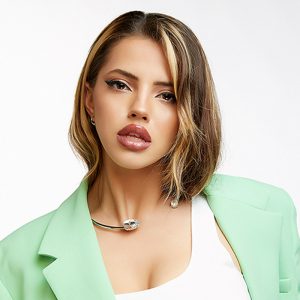 Rebellious and uncompromising, DARA is at the forefront of the Bulgarian music scene. With her distinctive voice, alluring style and irresistible charisma, she has come to be recognized as one of the main trend-setters on the Balkans and Bulgaria’s most beloved pop star. As part of the country’s biggest record label since 2016 – Virginia Records – she has so far gathered more than 80M views on her videos and just as many streams on her singles, which have all been #1 in the Official Airplay Chart in the country.

The award-winning singer made a smashing debut in 2016 with the infectiously melodic single “K’vo Ne Chu”, which reached #1 in the Official Airplay Chart. The following year DARA was awarded “Best Female Artist” at the Bulgarian Annual Music Awards and since then, her career has been growing even faster, both locally and internationally. DARA has worked with top music producers like Chris Young (Rod Stewart, Kylie Minogue), Jungleboi (ZAYN, Rihanna, G-Eazy, will.i.am., Craig David, R3HAB, etc.), Yoad Nevo, Romanian hit-maker Monoir and other. Her latest bangers “Thunder”, “Cold as Ice” and “Ai Ai” (“Fire”) have further stamped her as a pop phenomenon, record-breaker and crowd-favorite, having spent several weeks atop the Official Airplay Chart in Bulgaria. DARA is also the new coach on The Voice of Bulgaria, season 2021.